Here are eight sentences from SEMPER FINE, the Marine Ménage in my spanking/bdsm/ménage boxed set SOMETHING ABOUT A MAN IN UNIFORM! It's available at a special PRE-ORDER price, so grab your copy now! 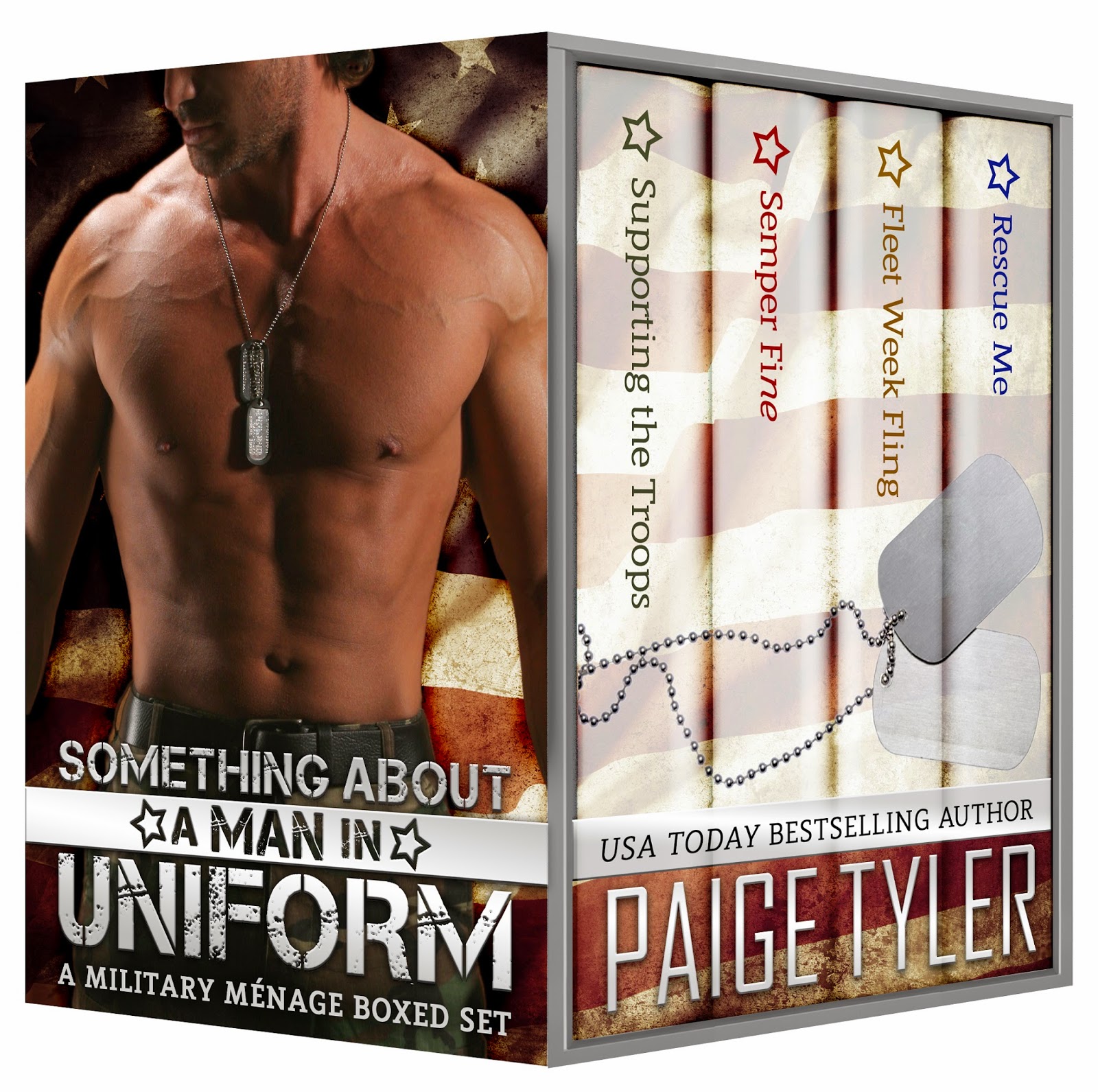 
Thanks for participating and visiting Saturday Spankings. Click on the link to check out the other authors on the tour! And if you'd like to read more from SEMPER FINE, I've included an excerpt below, as well as the buy links.

Delaney Shaw is stunned to discover that her high school crush Colt Baxter is the best man at a wedding where she’s the maid of honor. Too shy to ever come on to him back then, she doesn’t intend to make the same mistake now. There’s only one problem. She’s just as attracted to his friend and fellow Marine, Jagger Cruz. Not wanting to come between them, Delaney decides not to make a play for either one. But when it turns out that in between them is exactly where Colt and Jagger want her, she gives in to her desire to be the center of a hunky Marine sandwich.

But when Colt led her over to Jagger, he didn’t ask her to kneel down in front of his friend. Instead, he gently guided her over Jagger's lap. The next she knew she was lying across the Marine’s muscular thighs with her ass in the air and her toes barely touching the floor. Jagger steadied her by getting a firm grip on her bound wrists where they rested against her lower back. Suddenly, his earlier comment about spanking her for not behaving came back to her. Despite having just had an orgasm, her pussy spasmed. Of course that could have something to do with his erection pressing up against her hip. Or more likely, she knew exactly what she had coming in this position.

She chewed on her lower lip. Even though the idea of being spanked was a huge turn-on, she was a little nervous. “I’ve never been spanked, so be gentle with me, okay?”

Jagger caressed her derrière again, eliciting a little moan from her. “I won’t spank you any harder than you can take. Promise.”

Delaney wanted to ask how he knew what kind of spanking she could take, but didn’t. He obviously knew a lot more about this spanking thing than she did. Taking a deep breath, she turned back around to find Colt still down on one knee in front of her. He slid his hand in her hair and tugged gently, lifting her head to kiss her. When he pulled away, his eyes were practically dancing with excitement. He was turned on at the idea of watching her get spanked, she realized. For some reason, that made her even hotter.

“Ready?” Jagger asked, giving her ass a squeeze as Colt stood and moved off to the side.

Delaney could only nod. Taking a deep breath, she rested her cheek against the bed and waited.

That must have been answer enough for Jagger because he lifted his hand and brought it down on her ass with a firm smack. Delaney gasped.